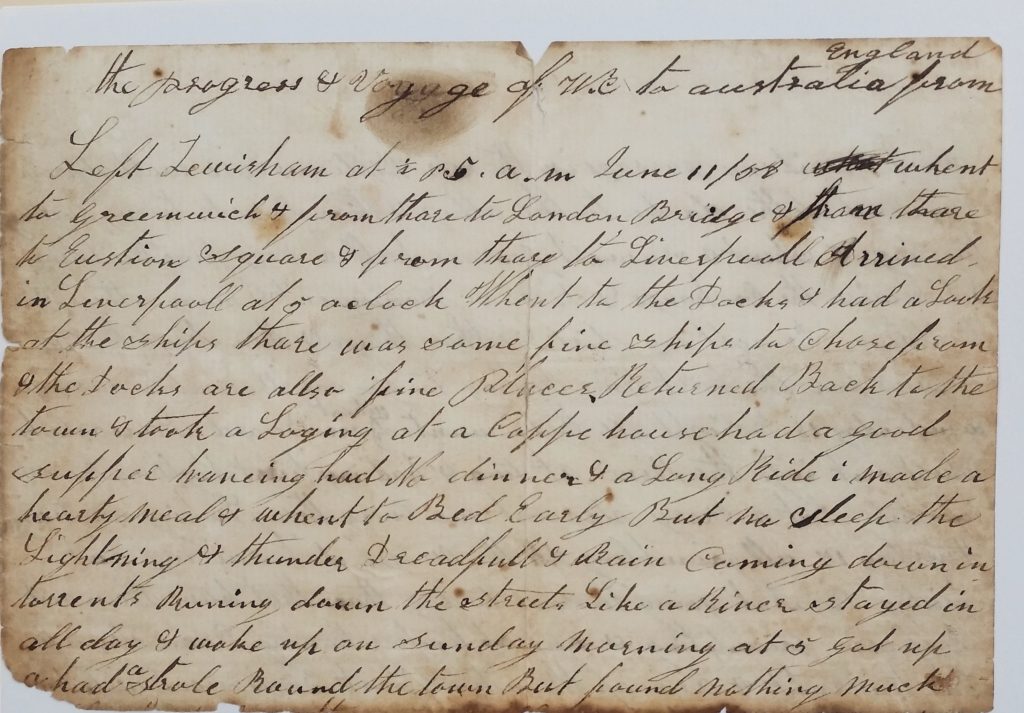 Editor’s note: This transcription has used earlier transcriptions made by William’s great-grandson Robert A. Carter and by Mabel Carter, wife of William’s grandson Thomas Carter. Both of these transcriptions have made my task so much easier. However I have varied from these two transcriptions slightly in relation to spelling and some punctuation where I prefer to retain the original.

Left Lewisham at ½ p 5 a.m. June 11/58 whent to Greenwich and from thare to London Bridge & from thare to Euston Square & from thare to Liverpool. Arrived in Liverpool at 5 o’clock. Whent to the docks and & had a look at the ships. Thare was some fine ships to choose from & the docks are also fine places. Returned back to the town and took a lodging at a Coffee house. Had a good supper, having had no dinner and a long ride i made a hearty meal and whent to Bed Early. But no sleep the Lightening & thunder dreadful and rain coming down in torrents running down the streets like a River stayed in all day & woke up on Sunday morning at 5 got up & had a strole round the town but found nothing much to look at everything seemed to be very dull but the Die was cast & it was no use to fret got my breakfast whent across the Mersey to Birkenhead with a man who was staying at the coffee house who proved a friend to me and gave me every information that i required. Took me on board a ship and told me whare to get what i wanted for my use. When i came back from Birkenhead thare was hundreds on the boats and pier some just came home and others going away. Liverpool is a large place Broad streets and large buildings all built on a solid rock. The docks reach nearly 10 miles. The streets are much like the streets of London and named the same as many of them are.

Monday 14 whent to the market and a very fine one it is and to the museum they have the Best Collection of Birds Beasts & Reptile Fossils and other things i ever saw. Whent & paid my passage in the sir William Eyre walked from one end of the docks to the other & then back to my lodging.

Tuesday 15 whent & saw St. Georges Hall a very fine building and likewise the Exchange and Nelson’s  monument and many other fine buildings. Bought my shirt & other things and then back to my lodging for the last time having to go on board tomorrow.

Wednesday 16 Bought all that i wanted. Whent on board at one o’clock whent out into the river at two and had my first night on board a ship. Not a very pleasant one. Everything looking so strange.

Thursday 17 All grumbling at the vessel not sailing out.

Saturday 19 the government commissioners came on board and after they were gone all was excitement getting ready for sailing. ½ past 3 a steamer came & was made fast while they raised the anchor. The anchor up then a puff of steam & good Bye Old England  & all that is dear to us for we have began to leave them passing the clock tower 10 p 4.

July 26: Much the same as yesterday. A ship homeward bound. Many wishing they were to.

July 27: Fine. Going slow, beautiful sunrise. Two ships in sight. Came up to one. She was from Liverpool 8 weeks out. Her captain sick and our doctors went to him.

July 28: Cloudy and not so hot as yesterday. A turnout with the Irish who were eaten up with vermin. I found some on me. I dislike Irish worse than ever I did. They don’t kill them.

July 30: Fine and wind stronger. A turnout in the second cabin with the Jews. They are like the Irish a dirty lot. All quite well at present thank God.

August 1: Cloudy and raining. A beautiful rainbow the shape of a horse shoe.

August 2: Fine morning. Many birds flying round, one flew on deck and was caught. The sun north at 12 oclock in the day. At home it is south at 12 o’clock.

August 3: Blowing hard all night. Everything knocked out of place. The sea running very high. Wind howling. Children crying. Men shouting and swearing. Rain and sun all in an hour and very cold. Near the Cape. Hundreds of birds.

August 5: Very cold and wet everybody very dull and out of order. Raining all day. Night very rough and sails turn every man out all night.

August 7: Fine morning which makes the old saying true. After a storm comes a calm, and so it is here. The deck is covered with ropes and torn sails torn to pieces.

August 8: A cold sharp morning like March weather. Rain and sleet. Came up with “Blackwall” from London, 60 days out. A fine ship.

August 9: Cold and strong wind. Going 12 knots. A ship in sight and I am getting tired of the sea.

August 10: Fine but very cold. Going well. The days getting longer. Everyone in good health. New moon and we saw it. The captain never seen it so soon.

August 11: Blowing and snowing and going fast. Gliding thro’ the sea like an arrow. My wedding day and I hope it will not be the last I may live to see; If it should please God to spare me. A ship on our port side which proved to be the “Albion” from Liverpool started soon after us.

August 12: Very cold & blowing hard. The sea flying over the ship and at 10 o’clock at night, all hands on deck. Men shouting and Captain calling.

August 15: Fine morning, slow, ship rolling very much at night. Rolled me out of my berth into the one opposite. An Irishman’s.

August 16: Cold & foggy. Going slow. Everyone tired of the voyage.

August 17: Every sail but 2 taken in. As the sailors say ‘close reefed’. The ship bound, rolling like a monster of the deep. The waves running very high and the sea sweeping everything before it. And as the Irishman says “we had to lay down to stand or hold on.”

August 19: Very cold & the sun shining like it does in England in November.

August 20: Cold & raining hard, going slow but sure. We hope to get out of this sometime.

August 21: The sun shining faintly like winter, but Cold.

August 22: Cold grey morning and raining. People wondering if they shall ever see their friends again.

August 23: Cold & raining. Lay to all night. An island near but not in sight. 12 o’clock a cry of Land Land Land. Then such a rush on deck forgetting it was so cold, but there they stood with their eyes riveted on it being so long since we saw our own native Land. This having no one to own it is Called Prince Edward’s Island.

[The Prince Edwards Islands (there are 2 islands) are in the sub-antarctic Indian Ocean at 46 degrees Latitude, 37 degrees Longitude, smack in the middle of the “Roaring Forties”. The islands belong to South Africa. Ed.]

August 24:  Still  cold & raining. Many blaming the Captain for going near the island.

August 25: Cold & foggy. Everyone getting thin.

August 26: Cold and snowing fast. The ship rolling, men shouting, and laughing at others falling down, and snow balling as they do at home in winter. This would be a snow in harvest with all at home.

August 28: Snowing fast and freezing hard. Very cold not able to stop on deck. The snow balls flying like gun shots at you till they knock you down then hurraying and shouting such as I never heard before.

August 29: Very cold. A deal of snow last night. A battle in the second cabin for a gun which was kept up till 2 o’clock this morning, when we were awake in the steerage with  fiddling & dancing.

August 30: Cold & snow. Everyone getting very thin. Can all tie our own shoes.

August 31: Sun shining. Looking a little pleasanter than of late.

September 2: Cold snowing & freezing going 14 knots. Every one of the sails torn or taken down and some blown away. Could hardly lie in bed.

September 3: A fine morning sailing well. Everyone seems to have fresh life in them with the sunshine and pleasant weather.

September 4: Very cold wind blowing and the waves jarring the sides of the ship like a canon fired at it and sweeping over her sides like mad. 30 hams stolen out of the ship’s store and the sailors got their grog stopped.

September 5: Welcome morning. Such a scene no pen can describe. Men knocked down with waves rushing and roaring like thunder smashing all before them. Men washed about the deck like logs of wood. Seats and tables all torn up by holding to them.

September 6: Cold wet morning the vessel bounding rolling over and over so that her yards are dipped in the water and then back to the other side. Such a night of it. No rest, worse than Saturday night. Everything wet.

September 7: Cold wet snowing and everything wet, the water running into our beds. All holding one another up. Women obliged to sit down. They bore it bravely though it was bad living.

September 8: Another fine morning but preceded by the worst storm we have had. It began at 9 at night and lasted till 2 in the morning. Every sail blown away or torn to billions but two.  So suddenly it came on us. The captain and 3 mates shouting to the men to Reef sails & the men back All gone Sir or Blown to Ribbons, Sir but the top sails.

September 9: Fine morning the sun shining gloriously out & the ship going well. All faces lit up with hope & the joy of seeing the long looked for shores of Australia which is to be our weal or woe.

September 10: Fine but I have got a bad cold our feet have been so long wet. I received a challenge today from one of the Passengers to discuss with him strong drink versus total abstinence. I accepted it but when the time came he would not come back so I had to lecture by myself the Captain & doctor, a gentleman of the first cabin coming down to hear us as I should add the other nobly acknowledged he could not uphold strong drink.

[The account stops here.  Presumably the “Sir William Eyre” reached Melbourne on or about 15 September 1858. William Carter subsequently married and settled down in Footscray and pursued his trade as a pottery maker. Ed

6 Replies to “Aboard ‘Sir William Eyre’”

What are your thoughts on Aboard ‘Sir William Eyre’ by Brian Lewis? Cancel reply