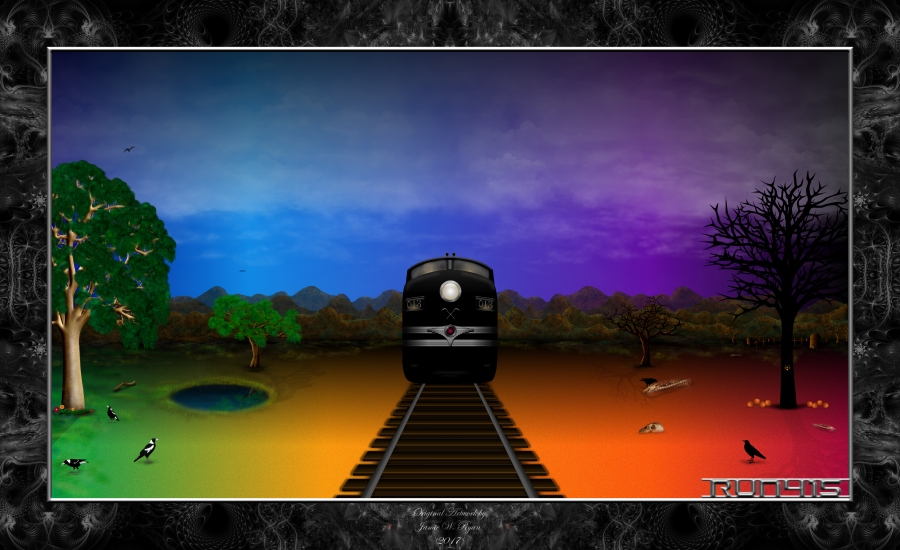 “That holy dream, that holy dream,
While all the world were chiding,
Hath cheered me as a lovely beam
A lonely spirit guiding.
What though that light, thro’ storm and night,
So trembled from afar –
What could there be more purely bright
In Truth’s day-star?”

There is only one seat out of the rain. The platform drips with water which clacks against the concrete forming pools in dark shadows. It is a grisly night as Karl waits for the train to take him home to his fire…

The Stranger wriggles in cold expectation, unfurling the collar of his overcoat. It sits neatly under his hat, still dripping with rain; he huddles into its warmth, wrapping it snugly around his thighs.

There is no sign of the train, so Karl sits down out of the rain. He taps his pockets with increasing anticipation, searching for a packet of cigarettes that are nowhere to be found.

Sensing his frustration, a hand appears…it is holding a golden cigarette case which shimmers in the distant light. And inside, quite appropriately, are two cigarettes…

“I insist!” says the Stranger holding out the case.

The Stranger strikes a match. In the flare Karl can see the most astounding pair of eyes that he has ever seen. They glisten in the light, almost purple…knowing, aged eyes that pierce Karl’s soul from beyond the wavering flame. The Stranger lights Karl’s cigarette and then puffs on his own. He discards the match which quickly expires in a puddle of rain.

“You’ll know when your time has come,” says the man rather profoundly. “Do not be alarmed. It is the nature of all things.”

Karl doesn’t know what to say. He looks towards the sky…the falling rain…and it continues on relentlessly.

The Stranger rises to his feet. The rain doesn’t bother him. He walks over to the edge of the platform. He looks to see if there is any sign of the train.

Karl now hears the sound of the train that echoes in the distance. It hurtles through the night, carving its way through the blackness as if possessed by the devil himself.
The train soon arrives, thundering into the station, bellowing its arrival like some wicked charging beast. It is then that Karl realizes that it isn’t going to stop.

The Stranger steps forward, too close…it looks like he’s going to jump?

Karl leaps to his feet, sensing the Stranger’s intentions. He runs towards him but it is too late…

The Stranger jumps from the platform and is devoured by the roaring express.

There is no scream to be heard above the cold steel wheels. No mangled body to be revived or resuscitated. There is only the rear of the train which shrinks away into the night…?

Karl stands in the rain…it drips down his face. His astonished face that contorts with disbelief. Karl checks again but there is nothing there…no body…just the rain and a now quiet station.
Karl returns to the seat to try and gather his senses. He sits for a while. Silence. Was it all in his mind…deranged? Or just a figment of his ‘magination?

“Damn!” he exclaims, searching hopelessly once again through his pockets.

Soon Karl notices the golden cigarette case lying on the seat beside him. He examines it out of curiosity. He knows that it will be empty. It is a beautiful item, old and exquisitely crafted.
Karl wonders how much it would be worth. A dead man’s cigarette case? He opens it up and is instantly stunned by what he sees…

Two cigarettes!? Karl is both shocked and astounded. He wonders how that can be.

Karl soon senses movement. He looks up, startled. A man walks towards him along the dark and dreary platform. The man breaks into a trot as the rain falls all around him.

There is only one seat out of the rain…

Karl wriggles in cold expectation. What should he say of these strange events that he has just had the misfortune to witness?

“Nice night!” says the man. He rummages through his pockets, searching for some cigarettes that mysteriously are not there.

Karl opens the case – two cigarettes. He offers one to the man who smiles appreciatively.

An approaching train screams in the distance…

There is no longer fear in Karl’s purple eyes…

2 Replies to “The Last Cigarette”

What are your thoughts on The Last Cigarette by Jamie W. Ryan? Cancel reply